A new report on The Business of Fashion has confirmed what most of us suspected: when it comes to fashion week, influencers hold the key, at least where social media is concerned.

Citing tracking firm Tribe Dynamics, the article states that “of more than a dozen major luxury brands that released content tied to men’s fashion week in Milan and Paris, or to their resort collections, none came close to making the same splash on Instagram as the corresponding shows did last year.” Ostensibly, the reasons why are simple: no people there to upload Instagram Stories equals fewer eyeballs on the content. “The buzz generated around a fashion show comes not only from the brand itself, but from industry tastemakers, celebrities, and influencers who partner with them to promote a runway event or presentation,” comments BoF. It then quotes influencer marketing agency Obviously, which confirms: “Typically, influencer posts perform much better than brand posts in any context.”

Take a venerable name like Hermès, which (irrespective of its much-lauded behind-the-scenes Livestream) garnered just 28 percent of its earned media value during the weeks surrounding the show compared to its 2019 effort. Prada, too, struggled to make as much as a splash as it did at its extravaganza in Shanghai one year ago, suffering a 60 percent decrease in EMV, despite involvement from the likes of Juergen Teller and the fact it was Miuccia Prada’s final solo show before the arrival of Raf Simons. (In a statement to BoF, however, the Italian house claimed it out-performed its luxury peers and enjoyed quadruple growth numbers in terms of engagement on Chinese social networks.) 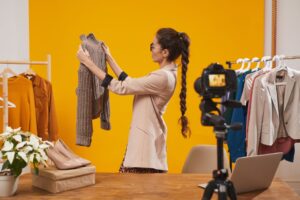 But it’s not just the powerhouses that were affected. Jacquemus went much bigger, holding an in-person runway show in a (typically) Instagram-friendly wheatfield one hour outside of Paris. Despite pulling out those stops, the French label received roughly half of its earned media value compared to its corresponding effort last year, perhaps proving the need for front row gold dust at even the buzziest labels. This time around, the guest list was limited to a strict 100 names, whereas its SS20 party in the lavender fields of Provence saw appearances from the likes of Emily Ratajkowski and Baptiste Giabiconi.

Given most brands were testing the digital waters for the very first time, the date hardly comes as a shock. But it does give food for thought going forward. If a tree falls in the forest but no one is there to hear it, did it really make a sound? In a similar vein, if you put together a great digital showcase but no one talks about it online, was there really much point? (Assuming, of course, the main objective is to raise brand awareness rather than cater to buyers and the industry.)

Creating sharable moments offline is one thing; to do it online another. Merging both won’t be easy. “The problem to solve today is not one of digitization but amplification, as any brand activity is reliant on amplification to be successful, and digital transformation is key in this process,” Launchmetrics chief executive Michael Jais told BoF.

Even if digital doesn’t quite capture the visceral magic of what goes down live, it does bring its own virtues — namely the fact you can, well, actually make out the clothes. What you’re seeing is what the designer wants you to see, be it an up-close shot of the calfskin strap watch or the perfectly executed one-pleat trousers. Nichanian wrote in her post-show release how the collection “[expressed] lightness, simplicity and nonchalance, its clean silhouettes [creating] a timelessly casual look.” This took form in tonal blue suit jackets that looked a bit seersucker-y (one look was styled tucked into the model’s elastic-waist pants!), French Riviera-ready summertime shirts, and easy-breezy blousons complete with a removable collar. Wicked hits of fluorescent yellow offset the dark color palette, adding a wink of devilish to the accessories in particular.

If Chanel’s horribly executed Cruise presentation was an inauspicious start for fashion’s digital pivot, Hermès’ easily-digested artistic approach is perhaps a bellwether for the way forward, at least as far as craft-focused luxury goes. “Here at Hermès, we use an equestrian phrase that seems particularly apt in this day and age: ‘Straight ahead, calm, and poised,’” remarked Nichanian. Amen to that.