Matthew Williams has over a decade of experience as a music and art creative as well as the founder and creative director of 1017 ALYX 9SM, and he’s continuing strong even in the face of the Covid-19 crisis. On this episode of ‘The Dropcast,’ hosts Jian DeLeon and Noah Thomas chat with the designer, who is still virtually working with his global teams and finding time in between for online yoga all while living out of his suitcase since returning to New York from Milan after the outbreak.

Palace x Evisu start off the quick hits with their MC Skibadee collab paying homage to the latter brand’s role in the London club scene (6:35). One of Matthew’s first jobs in retail was selling denim, and he remains particular about the material to this day when researching and creating pieces for ALYX.

Matthew’s also intrigued by the air camouflage seen on Virgil Abloh’s custom jet for Drake, dubbed “Air Drake,” which took inspiration from work created by both creatives: Drake’s Nothing Was The Same cover art, and the set from Louis Vuitton’s Paris Fashion Week show earlier this year (9:53). While the Boeing 767 is equipped with the perfect camouflage for flights in the sky, it has certainly attracted attention during its time on the ground. If Matthew were to dip into the world of aircraft design, he would return with the Tesla of planes, simultaneously stylish and ecologically sustainable. 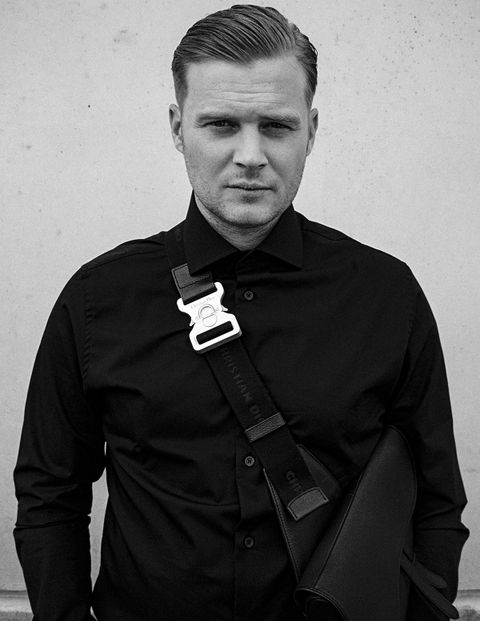 ‘Tiger King’ has been the latest show to blow up during this quarantine period, making people just as unified in agreement about Joe Exotic’s next-level fashion style as they are divided over freeing the incarcerated star (14:01). The cast reflects this, with Jian highlighting other problematic videos about Joe Exotic that have surfaced. If you’re looking to graduate from watching the docuseries, tune in to free art and fashion lectures offered by Alexander McQueen’s Sarabande Foundation (17:32). The series launched this past week and will continue to broadcast talks by speakers like Thom Browne, Tim Walker, Molly Goddard, and Samuel Ross until April 9.

Nike and Ben & Jerry’s have served their newest creation called the “Chunky Dunky,” a sweet treat for Dunk and ice cream fans (19:00). The talk brings out Matthew’s sweet tooth for mint chip and his weak spot for Kith Treats. Having been a weekly patron of the dessert spot, Matthew demands his own ice cream flavor which would involve some fruity pebbles, possibly wrapped up in an ALYX buckle belt.

Matthew is ready to bring the same undeterred spirit to fashion shows despite cancelations of the London and Paris Fashion Weeks (22:56). Although it’s difficult to predict the specific creative response that this will lead to, Matthew sees potential in the evolution of shows, and speaks to their importance for his brand in creating an ALYX universe that integrates real people.

The Question of the Week (QOTW) had Dropcast listeners asking Matthew anything and everything, from motivations for staying creative at home, finding a place in the fashion industry with an unconventional background, to requests for pairs of ALYX Nikes (29:30). It’s no surprise that Matthew’s a fan of mules, seeing how this episode’s Mule of the Week is the ALYX black leather clogs (37:47). Foamposite and Merrell mules all the way around.

Make sure to check out ‘Vibe Check,’ a Highsnobiety podcast featuring guests like Brendon and Estelle, the cofounders of Noah, who shared the importance of supporting independent brands, and Mission Chinese Food’s Danny Bowien who discussed anti-Asian xenophobia and dropped a recipe for quarantine soup. Groceries have been a staple for the cast in “What’d You Cop,” and Matthew has stayed on top of his workout game with new Nike training gear (39:57).

After you catch next episode’s QOTW which will be posted on Highsnobiety’s Instagram, make sure to leave a voicemail on The Dropcast hotline at 833-HIGHSNOB (833-444-4766) for a chance to be featured in a future episode.