As Paris Fashion Week Men’s gets set to click off for the very first time, trust classy old Hermès to provide an early lesson in how to navigate the digital space in a way that’s both original and modern. Some online fashion shows are akin to watching very expensive paint dry via a grainy livestream. This was the complete opposite.

Yesterday afternoon, the quintessential luxury house presented its men’s SS21 collection with a beautifully measured “live performance” that really couldn’t have been any more Hermès. Created by men’s artistic director Véronique Nichanian in tandem with director Cyril Teste, the one-shot short took viewers behind-the-scenes where the clothing was found on the backs of fey models. “Though the current situation forbids a live audience, spectators will be able to see backstage, and thus share in those moments of creative truth,” says Nichanian. Nowhere was this “creative truth” more apparent than the one fellow taking the edge off by listening to Primal Scream’s classic 1990 album, Screamadelica.

Even if digital doesn’t quite capture the visceral magic of what goes down live, it does bring its own virtues — namely the fact you can, well, actually make out the clothes. What you’re seeing is what the designer wants you to see, be it an up-close shot of the calfskin strap watch or the perfectly executed one-pleat trousers. Nichanian wrote in her post-show release how the collection “[expressed] lightness, simplicity and nonchalance, its clean silhouettes [creating] a timelessly casual look.” This took form in tonal blue suit jackets that looked a bit seersucker-y (one look was styled tucked into the model’s elastic-waist pants!), French Riviera-ready summertime shirts, and easy-breezy blousons complete with a removable collar. Wicked hits of fluorescent yellow offset the dark color palette, adding a wink of devilish to the accessories in particular.

If Chanel’s horribly executed Cruise presentation was an inauspicious start for fashion’s digital pivot, Hermès’ easily-digested artistic approach is perhaps a bellwether for the way forward, at least as far as craft-focused luxury goes. “Here at Hermès, we use an equestrian phrase that seems particularly apt in this day and age: ‘Straight ahead, calm, and poised,’” remarked Nichanian. Amen to that. 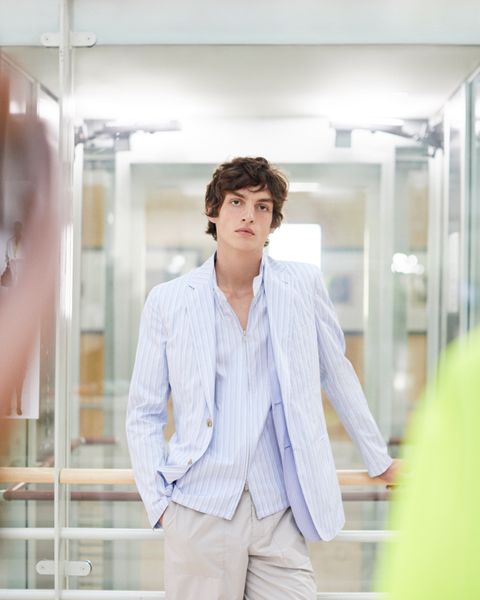