Nychos began painting graffiti in 1997 in his hometown of Graz (Austria). He was already drawing from comics and cartoons, but he was hanging back on adding colors because he didn’t have the patience required by acrylic paints. No 15-year-old kid has, after all, just as they are not willing to sit in the studio and meticulously paint canvases. That’s when Nychos found out about graffiti.

“Graffiti was a very effective way to get my energy into something. I didn’t want to sit in the studio, I just wanted to go out there and experience some action. Graffiti gave me all of that: It was adventurous and fun. It surely wasn’t the regular way to build up an artistic career, since nobody would actually regard it as a proper artistic education – but in fact, Graffiti was the best teacher I could wish for. A huge part of my technique is that I paint fast, and I’ve learnt painting fast by painting graffiti very fast ”

During his extremely prolific graffiti career (22 years and still counting), Nychos has been painting letters in all sorts of ways, going through all the stages in graffiti. However, after having done all kinds of styles, today he looks back at what influenced him at the very beginning: the style of graffiti that originated in his hometown of Graz. He is proud of incorporating in his latest lettering pieces the legacy of Graz’s King NEO1, who is also one of Nychos’ best friends. He is proud that, despite being now living in Los Angeles, such influences in his style are showing where he comes from. 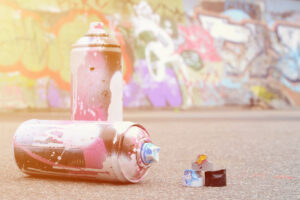 Nychos: “I was 21 and I lived in Australia. That was the time when I just started to get more serious about painting illegal graffiti, especially train graffiti. I met a couple of graffiti writers in Sydney and we had several weird experiences with the Australian graffiti task force, train missions we couldn’t complete because security was always popping up somehow. It has always been very hectic in Australia and I went through a very rough school there, because it’s just a different kind of humans out there.

One day, when I was already about to fly back to Europe, they invited me to “one more mission”. The guys from Brisbane were coming down and it was going to be fun, they said. We went south of Sydney and we waited at this McDonalds or Burger King or whatever, not too far from the actual spot. It was daytime, and we were about to paint: I was a bit worried because only two weeks earlier I got into trouble for painting in a train yard. I still have no idea how I got away with that.

Anyway, the other guys arrived and there was this little junky Australian kid who jumped into the trunk, ‘cause there was no space in the car for so many people. We were all “mask on”: I didn’t even see everyone’s faces, except for the guy who was with me. The driver dropped us on the highway, we had to run across it and hide in the bush and then, through the bush, we reached the trains that were parked right there. We started painting our pieces, super hectic – I had never painted at daytime before! My piece turned out super shitty, but the guy next to me painted an amazing piece. It said “SOFLES”. He was the little crazy guy who just jumped into the trunk.

While I was looking at the other guys still painting, the train pulled up on the tracks where we were standing. It was really fast, and we couldn’t hear it because there was another train going past. I jumped back, climbed the fence, cut my arm on the barbed wire, ran up the hill and, from up there, I saw that the other train stopped and people on the train were freaking out. I thought Sofles and his crew members were dead, that they have been run over by the train. I saw the driver getting out and walking between the trains. Now you should know that the Sydney trains are built to the floor and they have only a little gap underneath: you can’t hide under the train. You have to really squeeze in to not get hit by the other train. Plus, they are like three times faster than the trains here.

I threw the spray can, covered my bleeding arm and started walking through the Australian bush to the next train station. When I got there, there was already rail police everywhere. So I went to the highway, I had just 15 Australian dollars with me, and I stopped a taxi, which made me pay 12 Australian dollars to bring me to the next train station. And then the ticket for the train back home was exactly 3 dollars. It was not until two hours later that I found out that – luckily – nothing happened to Sofles and the other guys. They managed to escape the driver, jump over, run along the train, jump on a very long transport train, drive away, climb over the train they jumped on, run to the highway and get back to the car. And I was lost in the bush.

That day I thought I was not going to paint any train anymore, I just wanted to go home safe. Then, that same night, my friend got a message from Sofles with a whole carriage saying “KUNG FU FIGHTING”. Those guys went out again, already, to paint a message to the railway police.

However, the best part of the story of how I met Sofles happened three years later, when I came back to Australia and somehow ended up in Brisbane. I entered a shop and I saw this guy sitting there, he was going through a graffiti magazine. I got closer and we looked at it together for like 30 minutes, until I realized he was the same guy that painted next to me on that day – Sofles. The first thing we did, then, was going out to paint more.” 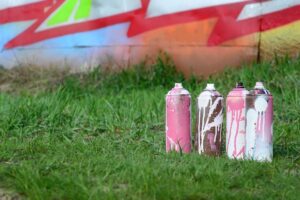 From Graffiti to Street Art

From extremely simple, easy-to-read pieces to the classic ‘horror’ font all dripping and melting, Nychos’ style has evolved a lot, eventually expanding into the realm of street art as he was more and more into drawing characters. His characters, which are always in action, also evolved from typical graffiti characters to what became his iconic style: street anatomy. Strongly influenced by the hunter culture he grew up with, Nychos is well known for showing the anatomy of animals and iconic characters from comics, cartoons and pop culture. Nowadays, his typical style is characterized by dissections, internal organs, translucent layers, X-Ray effects and bright colors.

“Animation is very much related with the core of what I’ve always drawn inspiration from (comics and cartoons): it mirrors the way I think, paint and draw. I always wanted to do animation at some point, and this is one way to tap into it: with things painted in the street, and not generated by a computer. I’ll definitely do more of it in the future. I see myself as an artist, not just a graffiti writer or a street artist, so maybe I’m gonna make movies totally illustrated by me and animated by people I like to work with”

We’ll keep an eye on this guy, eager to see what’s next; because, as he happened to tell us, “AR is just the beginning”.